This is what you see, experience and feel when you go sightseeing in Bangkok with open eyes, and more importantly, an open heart. There is so much LIFE in this city. It’s one of the reason why we love it – and why we love to share it’s unique beauty with you.

Audition For A Role At Bangkok Community Theatre

Where? At The British Club, Silom Soi 18

English-speaking Men and Women of all nationalities (minimum age 18 years) are invited to audition for the 7 roles needed to bring this delightful comedy to the stage.

Characters can be played by any nationality and the roles range in size from cameo parts to lead roles.

For more details about the show and BCT, please visit www.bct-th.org For questions and audition registration, please email bct@sala.net

B-Floor Theatre restages a contemporary performance based on a 1996 S.E.A.-Write work “The Other Land”

”The Other Land” was praised by the S.E.A. Write judges in 1996 as ‘stories of literary value and delicate presentation, allowing freedom of imagination in its readers.” The work by Kanokphong Songsomphan, an author who devoted his life to writing until its last minute, inspired B-Floor Theatre to create a contemporary performance in 2008. Selected short stories from the collection: “On Coliseum Street, “Homeland,” and “The Cat of Bu Kre Krue Saw,” were woven together and retold to reflect social conflicts at the time. “Everyone loves their country, so why are they fighting?“

Directed by Teerawat Mulvilai, the director of “Flu-Fool” and “Oxygen.” “The Other Land” will be performed (with English surtitles) as part of Diverse Arts Festival by the Pridi Banomyong Institute Date: 5th-7th and 12th-14th October, 2010 at 8pm, with a matinee performance on Saturday 6th October at 2pm and a post-show discussion with the director, activists and artists from the South.

All tickets are 400 THB. For more information and reservation, contact B-Floor at 089 167 4039 or bfloortheatre@gmail.com, or visit www.bfloortheatre.com

This is an incredibly cool video, especially if you know Bangkok – you’ll see it in ways never seen before (unless you often cruise around with a helicopter).

They mounted a wireless FPV camera

on a FPV airplane

and flew around the city. Awesome footage! I bet you’ve never been sightseeing in Bangkok like this before 😉

The Siam Paragon is an interesting place to visit even if you’re not actually into shopping. They often feature creative works of local Thai artists, like this leopard who’s fur is made from colored rubber bands. 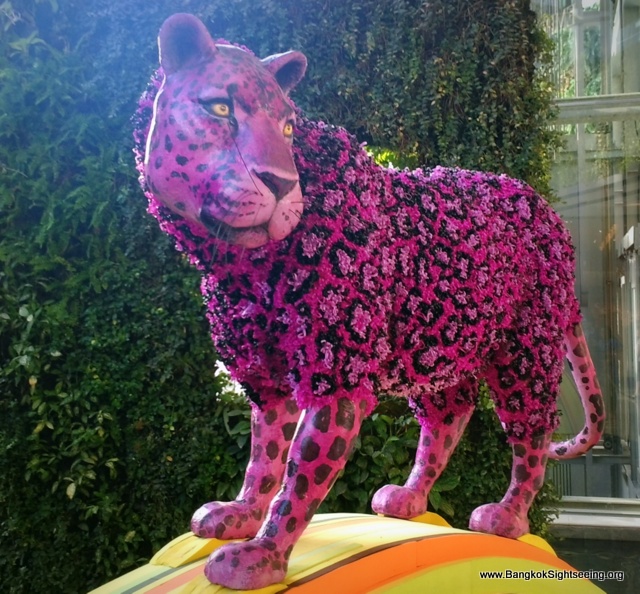 There are other animals as well, but you gotta visit the place yourself to see them. However, this one is our favorite.

Bangkok Theatre: if you think Bangkok’s nightlife is racy and raucous, just see what 17th Century London had to offer! 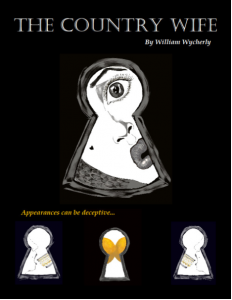 The Country Wife is the newest play to be staged by the Bangkok Community Theatre.

The playwright, William Wycherley, was born near Shrewsbury, England, in 1640. He relished the new found freedom when theatres re-opened on the restoration of the monarchy with King Charles II, after an eighteen year period of puritanical Parliamentary rule.

BCT’s production explores the parallels of 17th Century society with the present day; one which is obsessed with material wealth, fashion, gossip and sexual freedom.

Bangkok Community Theatre has been producing live shows for about 40 years. Their last production, Nunsense, was a sellout success and if the interest already shown in The County Wife turns into ticket sales, their latest show will be another smash hit. The director is Severin Herbert, Director of Drama at Harrow International School. He last directed Lysistrata for BCT based on the ancient Greek play. With The Country Wife, he is bringing another classic comedy to Bangkok audiences. But does a 350 year old play set in London have any relevance for modern day Bangkokians? As Severin Herbert says “there are many good reasons for staging The Country Wife. It is a play about sex and marriage; double standards and hypocrisy; gossip and stealth. It has huge parallels in our own modern age. The news is always full of those who stand before us as moral leaders, falling down because of their private behaviour; our media heaves with gossip and speculation and with celebrities famous not for their talents but for simply being a celebrity.”

The Country Wife has a cast of fifteen. Half the actors are new to a major Bangkok Community Theatre production having recently made their mark in BCT’s Fringe Show. Newcomer, James Laver, plays the debonair but deceitful Mr Horner who is happy for a rumour to be spread about town that he has become a eunuch following an illness in France. This gives him the perfect excuse to mix freely with the ‘ladies’ who are not as prim and proper as they would like to appear. Stephanie Wallis, a BCT regular, is Lady Fidget, one of the not so chaste ladies who is only too pleased to be palmed off on Mr Horner by her foolish husband, Sir Jasper (Michael Allman, another familiar BCT face) who is only interested in money and business.

Nic Frances, who almost stole the show in last year’s production Pygmalion as Mrs Pearce the Housekeeper, takes the title role of The Country Wife, Mrs Margery Pinchwife, the innocent young country girl who is introduced to the wicked ways of London. But will she succumb? Her bullying husband, in the capable hands of Jonathan Truslow (Henry Higgins in Pygmalion) will do all he can to make sure she stays on the straight and narrow.

The Country Wife is a fast-moving farce full of double entendres, mistaken identities and good old British honest vulgarity. Fans of the Carry On film series of films might recognize similarities with their love of naughtiness, ridiculous characters with ridiculous names (e.g. Old Lady Squeamish!) and a riot of fun.

Tickets are 800 baht and will go on sale from 1st September. Bookings can be made by emailing bctcountry@gmail.com or calling 081 937 3600. More information can be found at www.bct-th.org and on BCT’s Facebook pages.

Tickets are also available at Nelson Hays Library Cafe in Suriwong Road and at the British Club (for members).

For those wanting to make a night of it, The British Club will be laying on a sumptuous pre-show buffet of traditional British dishes. If you are looking for a fun night out with lots of laughs mark your diaries now, Wednesday 10- Saturday 13 October, and make sure you get a ticket.

You might want to leave your maiden aunt at home if she is easily shocked. On the other hand, with the temptations of Bangkok on her doorstep, there is no knowing what she might get up to. After all, as The Country Wife shows us, appearances can be deceptive.

Written over 350 years ago, The Country Wife, is William Wycherley’s hilariously bawdy classic Restoration comedy. It will be staged at The British Club from 8pm to 10pm from Wednesday 10 to Saturday 13 October 2012. It’s themes of sexual freedom, gossip, double standards and hypocrisy are as relevant today as they were in the 17th Century but, above all, the play provides plenty of belly-laughs and a really fun night out.

One of the main attractions in Bangkok is the famous Wat Pho temple. If you want to get a great current impression what it’s like before you go there, you should read this trip report by docgelo. You’ll also find plenty of beautiful photographs there.

One of the things Thailand is really popular for are massages: now you can find traditional Thai massage all over the world, from five star luxury resorts to cheap massage shops.

The event was organized by the Health Ministry of Thailand to promote Thailand as a spa and wellness destination.

The current world record holder is Australia, where 263 people were massages simultaneously in 2012.

But fortunately there are many places in Bangkok where you can get a great massage for very little money. We in fact highly recommend that you squeeze that in somewhere in your Bangkok sightseeing schedule – because let’s face it, Bangkok is a hot place, and if you’re on your feet for a long time, a relaxing massage is just what you need.

Eco-Friendly Furniture Made Out Of Recycled Coffee Grounds in Bangkok

This is not the kind of thing you’re usually aware of when you go sightseeing in Bangkok, but it’s interesting nonetheless. Thai architect and eco-designer Asst Prof Dr Singh Intrachooto of Kasetsart University’s Faculty of Architecture has created furniture that is made out of… coffee grounds (which have been donated by Starbucks).

It’s a pretty cool concept, because

If you want to see the furniture, you have to visit the Starbucks shop at Megabangna in Bangkok.

Or you can look at some photos in this article by the Bangkok Post.

If you want to know more about Dr. Singh Intrachooto, the man behind this project, you can also read this interesting interview from 2009.

The Siam – Fancy Accomodation in Bangkok

The author of GayGuide for Bangkok shares some of the fancy places he’s seen in the City of Angels.

Among other things, he reported about The Siam: the first urban resort in Bangkok. His verdict?

The Siam has a real rock star quality going for it. Though it may be hard to picture this luxury resort as a family-owned business, The Siam was conceived by the Sukosol family, the Royal Tenenbaums of Thailand.

Bejeweled and eccentric, matriarch Kamala Sokosol lives next door to the biggest gay bathhouse in Bangkok and has donated over $1 million to charity. If she’s the Liza Minelli of Thailand, then her daughter Marisa is the Barbra Streisand, the vocal prodigy and recording artist.

Brother Kriss Sukosol is one of Thailand’s biggest rock stars, who also happened to have nabbed the country’s equivalent of an Oscar in 2006. His brother Sukie, however, is considered the Renaissance man of the family. He founded the biggest record label in Asia then sold it to Sony. Since then he has written an inspirational book, produced and starred in his own reality show and found a following as a street photographer.

The Sukosol children have put together their precocious talents, not to mention mom’s several millions, to bring to life the modern and edgy Siam.

If you’re going to stay luxuriously in Bangkok and want to experience something truly Thai (instead of another international 5 star hotel stay), The Siam is an excellent choice.