This is one of the absolute must-see attractions in Bangkok. 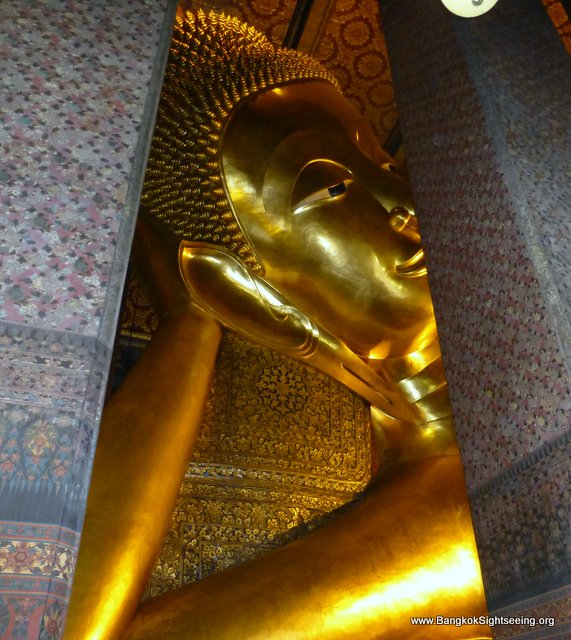 The famous reclining Buddha in Bangkok is located in the Wat Po temple. It’s so big that it’s really challenging to take a full-length picture of him – after all, fitting 43 meters in a single indoor-photograph is a bit challenging, and the only possible angle to accomplish this herculean task is when you’re standing at his feet. 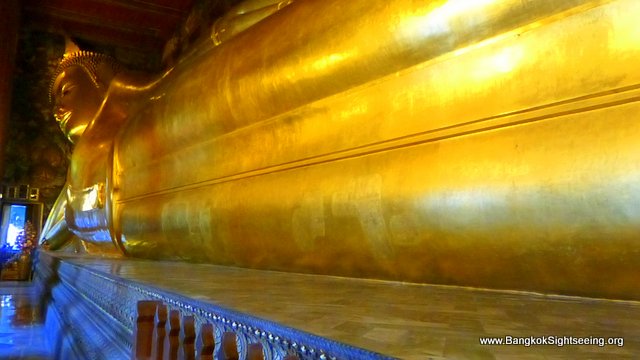 Speaking of his feet, they are interesting to look at too. Intricate designs made from mother of pearl inlays that represent 108 auspicious characteristics of the Buddha. 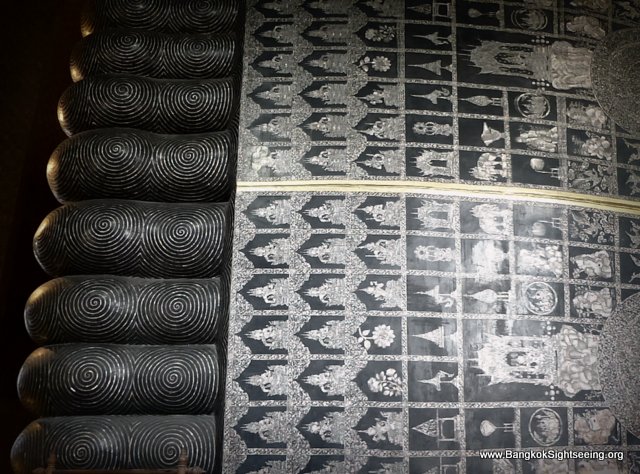 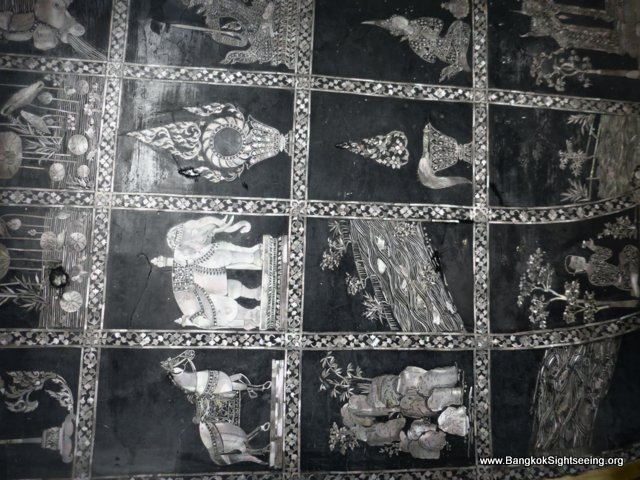 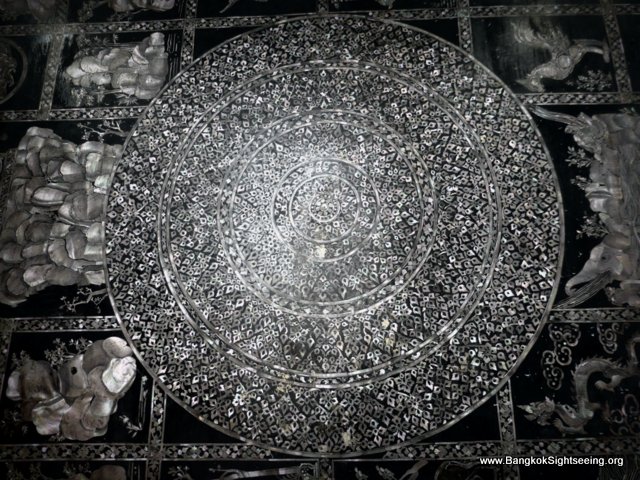 So when you go on a Bangkok sightseeing tour, just make sure to visit the Wat Po too – and keep in mind that when you enter the hall where the reclining Buddha is located, you gotta take off your shoes. You might want to bring a pair of socks, because on busy days so many tourists from all over the world walk around the hall that it can be quite stinky from all those sweaty feet, which is a shame, because if you manage to come here when there aren’t that many folks around, it’s a beautifully serene and peaceful atmosphere.

There are also plenty of smaller Buddha statues located around the large reclining Buddha, in different poses. 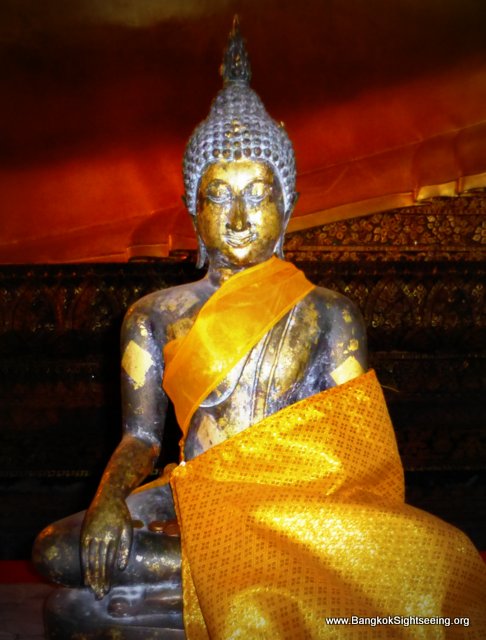 This posture represents how the Buddha remained calm and kept his meditative state of mind even when both outer distractions where attempting to break his concentration. It’s in fact one of the most popular postures of the Buddha in Thailand. It’s also known as the Bhumisparsha posture, or Subduing Mara.

Mara is the leader of the demons, and he tries to unsettle the Buddha with all the tricks, destractions and weapons he has at his disposal.

While Mara let’s his army of demons proclaim his powers, Mara then demands that the Buddha proofs that he indeed is enlightened. How does Buddha respond to this? By simply touching the earth, upon which Mother Earth proclaims: “I am his witness.” That’s good enough for Mara, who then takes flight with his army of demons. 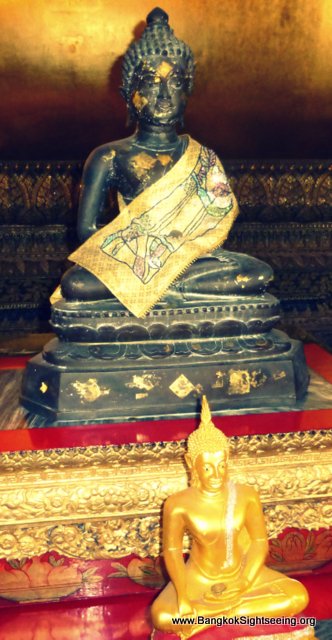 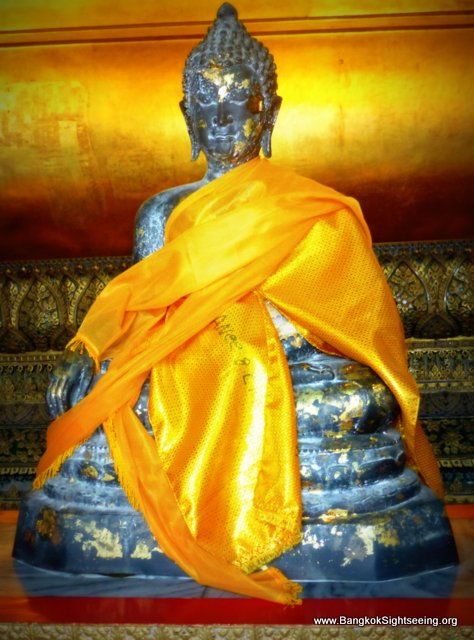 And this one is of course a miniature version of the reclining Buddha: 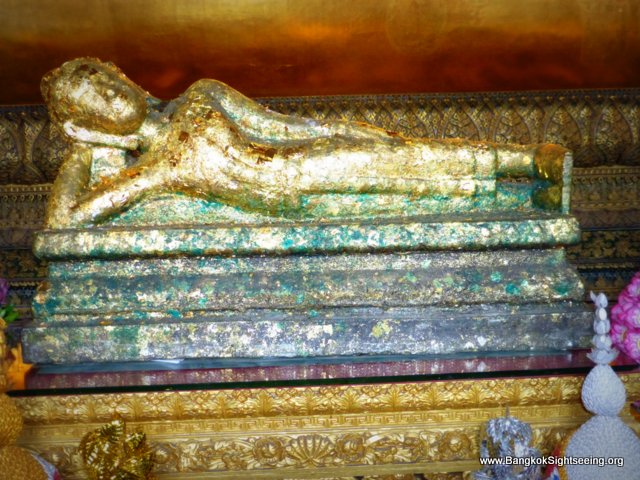 And if you are wondering what the reclining Buddha posture means, here is an explanation:

Many people think that it represents the Buddha “dying” (passing over into nirvana), but this is a mix up with a similar posture where his right arm is lying next to the body.

So this reclining Buddha image, where his head is rested on his right arm, simply represents that the Buddha is resting.

The story behind this is that there was a giant, called Asurindarahu, who didn’t want to bow before the Buddha, because he doubted his greatness. The Buddha simply enlarged his body many times, until he was much larger than the giant Asurindarahu, and kept laying there in this relaxed manner. Asurindarahu then accepted that the Buddha was indeed great and powerful, and bowed before him.

Keep in mind that stories like these are used as teaching vehicles. This one could represent a certain kind of humility towards spiritual teachers. There are some people who have a very high, and sometimes inflate, sense of self-importance. All these big shots who walk around and think they are better than others, and they might think that others don’t have anything to teach them or that they can’t learn anything from Buddhism since they’re already so great and awesome. So this effortless kind of demonstration of the greatness of the Buddha kind of represents that there is a different kind of greatness – and although I personally don’t believe this story to have happened this way, I think it’s a story that for a long time served as a good teaching tool to transmit knowledge and cultural values.

Previous post: What The New York Times Thinks You Should Do With 36 Hours in Bangkok