VietCuisine is a Vietnamese restaurant chain in Bangkok.

We tried the lemongrass salmon which they advertised with a big poster – after all if you advertise something with a fancy large poster, you’re probably really good at making it. Or at least you should be. 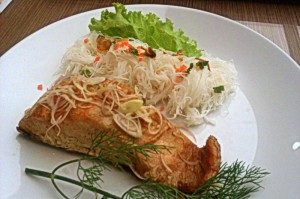 Unfortunately this wasn’t the case. Even our designated salmon enthusiast didn’t find any joy in this, and we each took a bite and left it at that, leaving a large chunk of fish uneaten on the plate.

The fish smelled bad, was dry and tasted like… well, old. You just can’t serve people something like that.

The service was friendly and attentive, but that didn’t make up for the lousy food.

You wouldn’t expect that quality of food in a fancy shopping mall like the Siam Paragon, but that’s why we constantly try new places: to do our best to spare you disappointments like that on a Bangkok sightseeing trip. Oftentimes people don’t want to stick to a prefabricated itinerary, but want to be spontaneous in planning their day. And then they might say something like: “He, I feel like eating Vietnamese, is there something around?” In such a case, we’d recommend you other places than that 😉