The Wat Po (วัดโพธิ์) temple in Bangkok, which also houses the reclining Buddha, is one of the most popular tourist attractions in Bangkok, and with good reason. It’s a large temple compound with many things to see and discover.

This temple is actually older than Bangkok itself – however, it used to be a very small temple and got upgraded and expanded over time.

You’ll see many interesting things when you walk around the compound, like these skillfully designed doors which are entrances to buildings of the Wat Po. 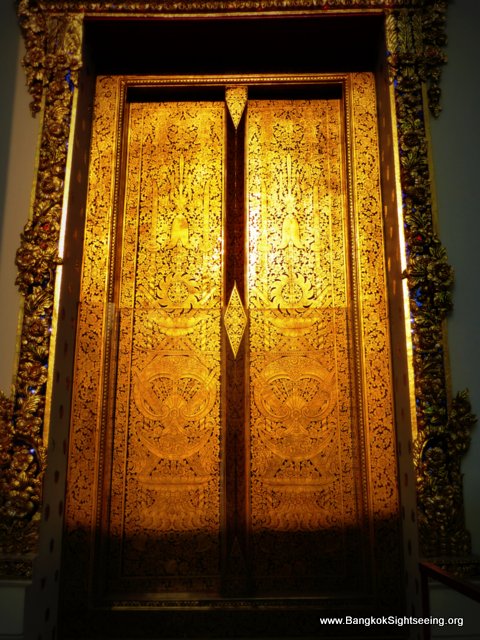 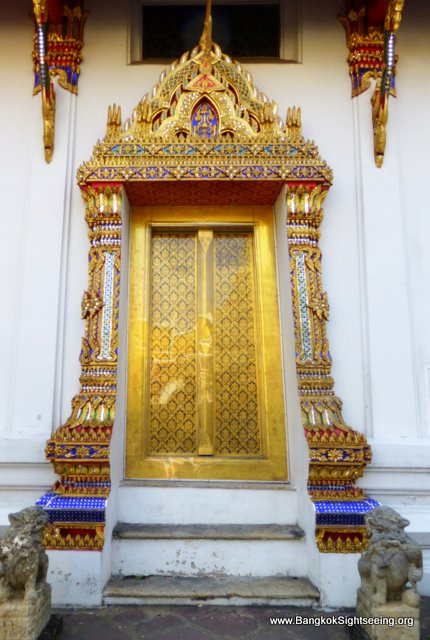 And here’s a detail of these door paintings: 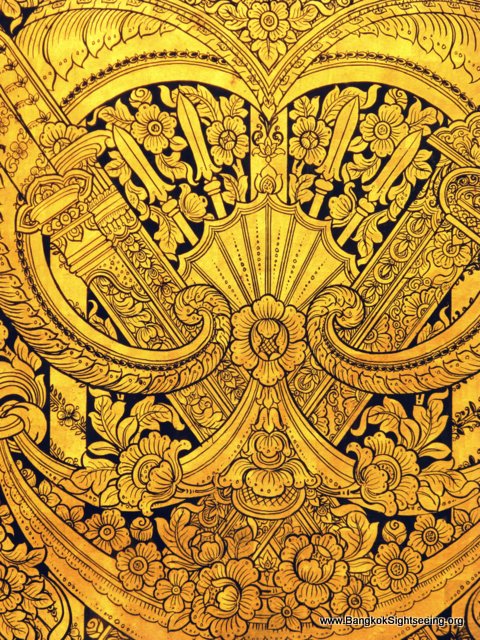 There are plenty of stone statues to be found also. 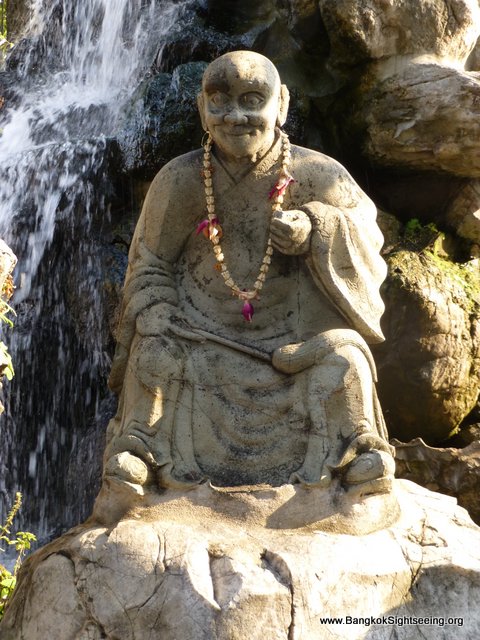 The most popular statues are these giant Chinese door guardians: 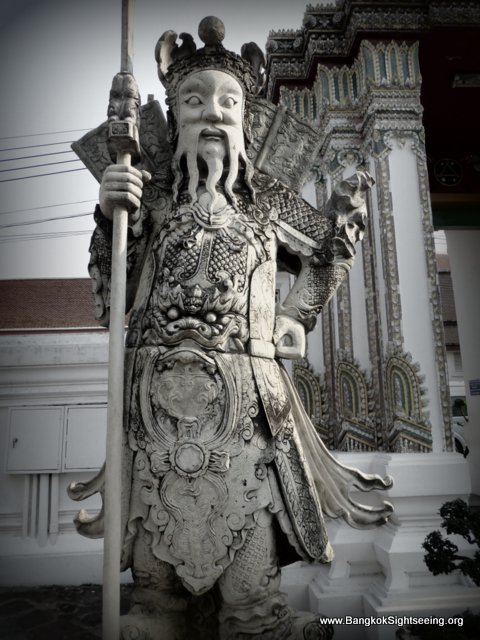 What’s funny about these Chinese giant door guardians is that they weren’t really made for this temple. Instead, Chinese vessels used them as ballast on the way from China to Thailand. There was a lot of trade going on between these two nations hundreds of years ago, and the Chinese bought plenty of things from the Thai people, so when the ships went from Thailand back to China, they were heavy and fully loaded. But when they went from China to Thailand, the merchandise was not heavy enough, and the ships needed some ballast – so they simply used these stone statues to make their ships heavier. Why the Chinese didn’t seem to value these statues isn’t known though.

But maybe even more interesting are these statues of Thai hermits (called ruessi datton in Thai) which practice traditional Thai massage. After all, this is the most popular place to get an authentic Thai massage (also known as nuad boran in Thai), and there is a school for those who want to study Thai massage that offers both introductory courses which you can complete within a week, and more advanced long-term courses. 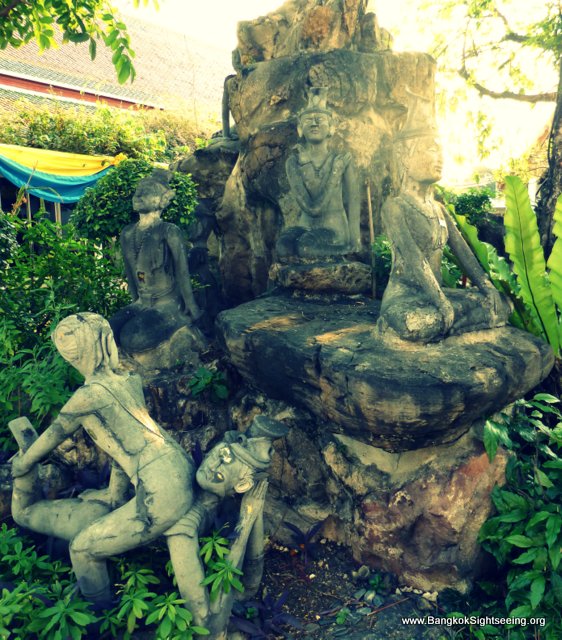 These Thai hermits used to live in mountains and forests of Thailand long ago and practice meditation, and it’s believed that they used Thai massage and a kind of Thai yoga to keep physically fit and to balance out the hardships of sitting motionless for long periods of time in meditation. 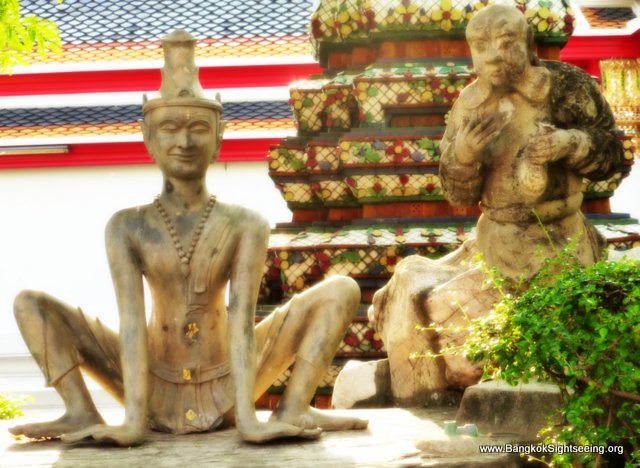 There are also books about the meanings and supposed effects of each Thai massage posture, but they aren’t very detailed, and this isn’t as well-researched as the Indian yoga.

Then there are stupas on the compound, some which contain remains of previous Kings of Bangkok. 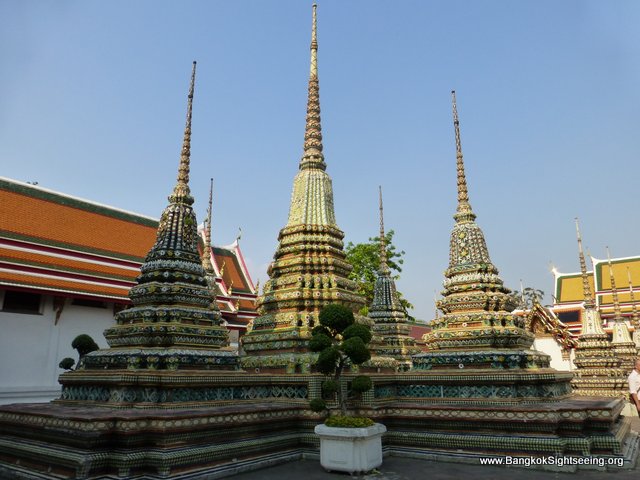 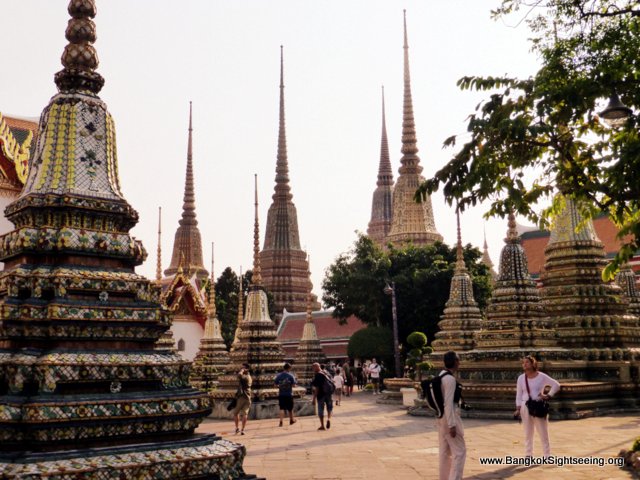 There’s also a long row of Buddha statues in the subduing mara pose, which is probably the most popular Buddha posture in Thailand. 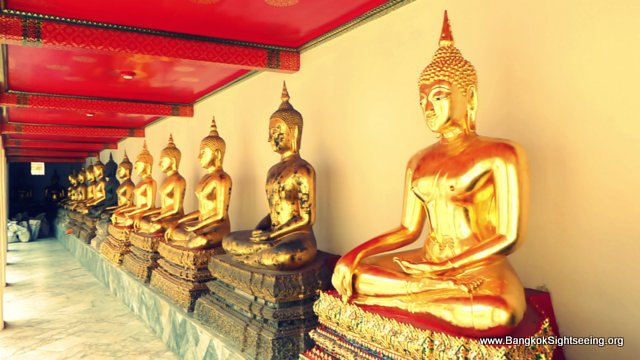 There are actually more than a thousand Buddha statues on the compound of the Wat Po temple. 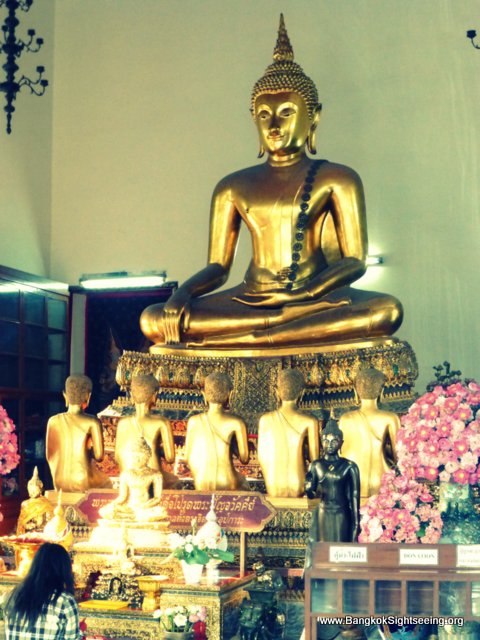 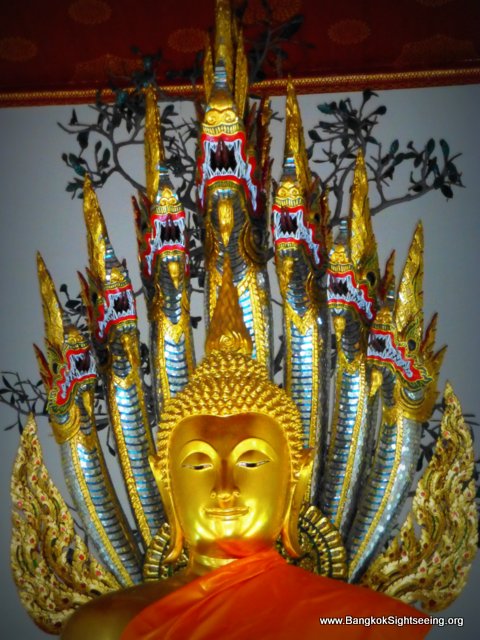 These shiny golden temple roofs gables with it’s colorful mosaic mirror decoration is quite spectacular when hit by sunlight, or even more – when shone on by strong lights at night, glistering majestically in the darkness. 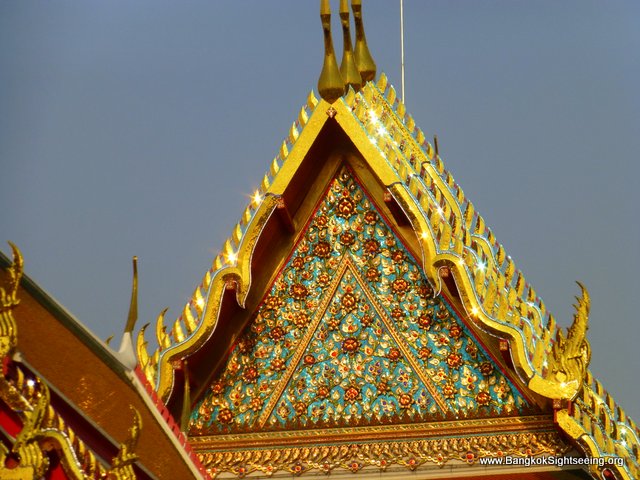 This Buddha statue represents peace, if you look at it you can see that it looks as if he is trying to stop something – and indeed, he is. He’s telling members of a family to stop fighting and quarreling. 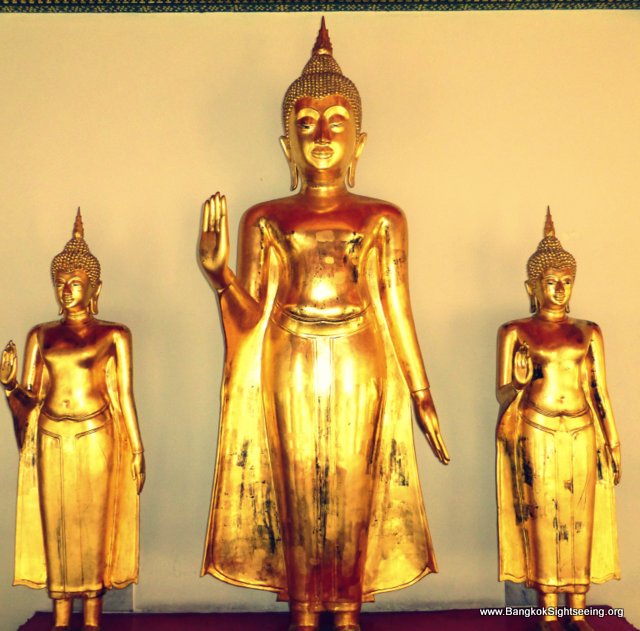 And, there are cats too 😉 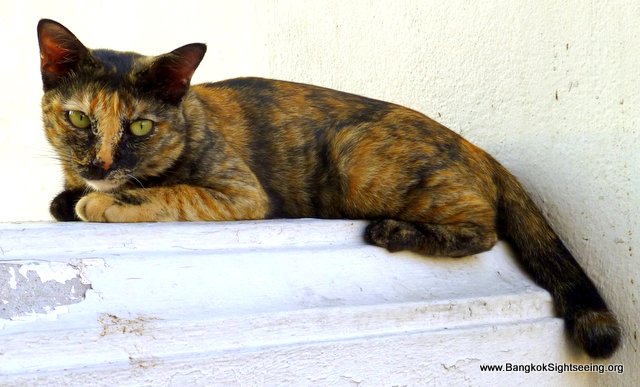 So if you like to visit the Wat Po temple in Bangkok as part of your Bangkok sightseeing activities, you can come here on your own, or if you want to learn a bit more about what the things you’ll see mean and the stories behind them, and how they fit into Thai culture and society and religion, you can hire a private tour guide or book a Bangkok day tour.

By the way – the term Wat Po temple is kind of redundant, because wat is the Thai word for temple – but it’s common to use that name in English anyway, so it’s fine to use it.

As many things in Thailand, there’s a long name for this temple too, which is Wat Phra Chettuphon Wimon Mangkhlaram Ratchaworamahawihan (วัดพระเชตุพนวิมลมังคลารามราชวรมหาวิหา), but almost no one calls it that way. However, Wat Phra Chettuphon is quite a common expression still, and if you get on a taxi to get to Wat Po, and the driver doesn’t understand where you wanna go to, you can still try to say Wat Phra Chettuphon.

Keep in mind that this is a huge temple compound, around 80,000 square meters, so you can take your time to walk around and explore – but it’s best to avoid the hot hours of midday if you plan on doing so.

Next post: Why Public Transportation Is The Best Way To Move Around Bangkok