Remember how we recently mentioned that turtles aren’t the most spectacular creatures which live wild in Bangkok? Well, how about these giant monitor lizards?

They are some Bangkok sightseeing attractions that you can’t buy your way into – you just have to spend some time in one of Bangkok’s parks by the water, where they sometimes just emerge out of the lake and move around the grass, often in search of food. 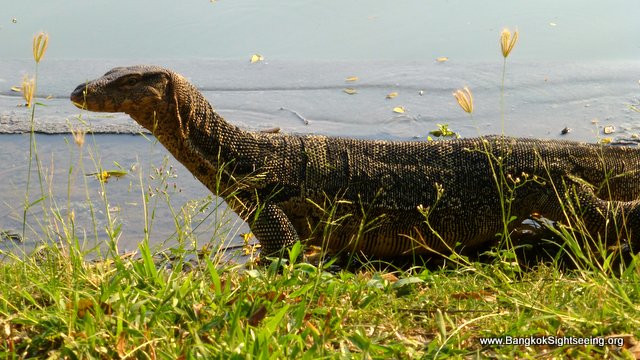 I still remember the first time I saw one of these – I didn’t know that there are these creatures in Bangkok, and I was reading a book on the grass when I saw some movement in the corner of my eye. I looked and I saw… ‘A CROCODILE! No… wait a moment… that’s not a crocodile… that thing looks like something which escaped from Jurassic Park!” Well, I later learned that they are called monitor lizards, but I was extremely amazed, partly because of them, and partly because of how little attention Thai people paid to this semi-saurier.

Thai people have a bad name for this animal – hia. It’s also one of the worst insults you can throw at someone in Thai, and in fact, I strongly urge you to not ever make use of this word, unless you want to get engaged in a physical confrontation.

They can grow to a length of almost 3 meters, and something between 1,50 to 2,50 meters is actually quite common to spot in Bangkok – drainage pipes, parks, lakes, rivers, canals, swamplands and golf courses. And they often show up in people’s gardens or houses (in search for food).

When they’re not hanging around in Bangkok’s parks, they often live in the extensive networks of underground drainage pipes which can be found underneath the city.

One reason why they can be seen so easily, even in a busy and polluted city like Bangkok is that they have almost no natural adversaries, and they eat pretty much anything – chicken, fish, frogs, eggs, snakes, birds, turtles, all kinds of wildlife and even rotten meat if they come across it.

They are surprisingly intelligent for reptiles too, and scientists found out that they can even count to seven.